The following is an outline of what was originally planned for my presentation on Friday 7th/Saturday 8th June during the Symposium held at the Amsterdam Orgelpark (6th to 8th June 2013) under the direction of Hans Fidom. For various reasons outside my control this lecture had to be rescheduled, shortened and eventually in large part abandoned. As promised at the time, this is now posted here to help complete the picture.


Attendees might also note: at the point of cessation of my own contribution on Saturday afternoon 8th June, the organ was in its “Gestalt” of an 8' Arnaut de Zwolle and an 8' constant scaled-register. The tempering was Pythagorean with the wolf at E♭ to G♯ (although checking and fine-tuning had not been possible, so there were some small variations). Little of what was performed after this on that day was therefore heard using the most appropriate pipe-scalings and almost nothing was in a suitable tempering.


For general background it might be of interest to refer to my recent article on this subject in “The Diapason” (May 2013).

For my sources and bibliographies etc. see also http://www.davidrumsey.ch/Bibliography.htm and my web-site generally under the “medieval” banner.


Some of the main issues in the design of the “Rumsey” organ were an analysis of extant repertoire requirements of the 14th and 15th century, studies of the relevant pipe metallurgy, scalings, key widths, keyboard compasses and accidentals, wind systems, Pythagorean temperings and many more details of organ-design and construction of this era.

the scope of this was taken from around the time of the Robertsbridge-Faenza-Buxheim collections.

the instrument does not primarily emulate a specific instance of iconography or archaeological remnant. However contemporary descriptions in tracts or representions in paintings - such as the van der Goes (Ange jouant de l’orgue/Angel playing the organ Hugo van der Goes - second from left), the Norrlanda remnants, Praetorius’ descriptions of Halberstadt &c. - were all taken into account. Interestingly, key-widths, without prior knowledge of the Gerritsz 1479 details discussed at the conference, turned out to be remarkably close matches.

the instrument now has one constant-scaled (33 mm) 8' rank, two variable-scaled ranks, 8' and 6' (after Arnaut de Zwolle - diameters halving on the octave, with an addition constant). The Arnaut de Zwolle 8' is always present. The front slider can either have the constant scaled rank or the 6' mounted above it.


On the subject of constant scaling, a statistical-analytical review of tracts and iconography is currently only in an early stage. However, of 140 pre-mid-15th century sources so far surveyed, superficial results sign-post that up to 80% of them could be representing constant scaling.

“This business has up to now caused musicians and good organ makers as many and wonderful thoughts as Mercurius of the philosophers did to the alchemists. It is [now] commonly held that the scaling of pipes cannot and may not be carried out according to the musical proportions; thus some other basis is sought. Some think that the basis of scaling is to be found in solid geometry and not in the musical proportions, and therefore have not been afraid to attack the musical proportions as old and deceptive inventions of Pythagoras; it is much to be desired that this dispute be sorted out.”

... it took European civilization from 8th to 19th centuries to resolve pipe-scaling geometry

“there is no doubt that the harmony issuing from an organ whose pipes are made of lead will be much sweeter than that which might come from pipes of tin or some other cruder and harder material.” (Jerome de Moravia 1272-1304 Tractatus de musica quoted by Giovanni Maria Artusi in 1600)

a variety of Pythagorean temperaments was required to cover repertoire and scaling paradigms of the era. (a1=466 Hz.)

which allows any of the following:

E♭/D♯ and B♭/A♯ choices (not yet built) would further increase options to:

☛ positions of ranks on the windchest:

the iconography variously gives what is apparently the higher-pitched rank on either the organist or the calcant side. Since the Rumsey organ came into regular use this has interestingly turned out to be something of an “issue”. Originally the 8' and 6' specification of the van der Putten copy of the Rutland Psalter organ (both ranks always sounding) was taken as a starting point, partly on account of early Blockwerk descriptions (e.g. Sélestat Manuscript) and iconography (Rutland). While the wooden pipes of the Rutland replica are relatively gentle and blending, when this is replicated with metal pipes the effect is noticeably stronger and far more “quinty”. Attention needs to be directed to the evidence and effect of strong “organum-like” Quints of this kind, undeniably present over these centuries (era of Sélestat through Rutland and Norlandda &c. - pre-12th to about 13th/14th centuries with vestiges surviving into the 15th and later). Some people have difficulties in accepting repertoire such as Robertsbridge when played on these “acoustically irrational” registrations. Now that the “van Straten” organ is playing, its own distinctly “quinty” quality becomes an interesting historic sequel to this. Nor was the strong Quint ready to disappear then: strong Quint ranks extended to a degree also into e.g. the Principal choruses of Gottfried Silbermann. The tempered Quints of the mean-tone tuned van Straten organ, however, currently seem to exacerbate and disturb any “restful natural quintiness” that otherwise comes from pure-fifths (another argument for a change to Pythagorean tempering perhaps? - indeed mean-tone Quints are historically the most out of tune). The perception of the 8'+6' combination changes strikingly as the auditor moves around it (something which I had intended to invite the audience to do): the blend is far better disposed to the 8' than the 6' when listening from 8' side and vice versa. 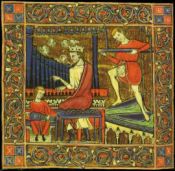 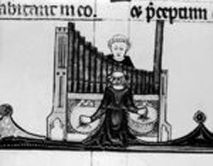 Clearly, modern perceptions of this music played on such registrations may require a significant degree of listener “retraining” (or a dangerous reliance on modern critics, as our philosopher suggested for the “modern, uneducated listener”). There were some interesting comments made afterwards indicating immediate acceptance of this registration by some participants.

The Gerritsz organ of 1479 has a doubled Principal rank: front side: tin - rear side: lead. This interestingly combines the metallurgical considerations above with these final thoughts on listener perception of “front and back” pipe placements.


Attending a concert at the Römisch-Germanisches Zentralmuseum Mainz (Germany) on Saturday June 22nd 2013, at which an hydraulis and a realization of a Theophilus design were featured, it was once again made clear that these very early organ forms frequently offered 8' and 6' (or similar) combinations, often inseparable. At least one characteristic sound of roman, byzantine and early medieval organs must therefore have been “parallel fifths”. This was mechanically contrived at Norrlanda. Their Pythagorean tempering gave pure quints so they produced perfectly-tuned resultants. That allowed lower apparent pitches from organs, saved on costs (just as an acoustic 32' does today) and was a work-around for a pipe technology that could not yet make larger pipes sound well, if at all. The relationship of this to vocal organum practices is obvious - and that could also reopen questions of just what “organum” meant: possibly suggesting another concept for those who so often - correctly - remind us, that the word had many meanings. It clearly referred to this musical effect available principally from organs. But did the cart of what we now think of as vocal organum style come before the horse of 8'+6' organs or vice versa? Perhaps there are more instances than we have hitherto suspected, where doubt could be clarified in this light and “organ” seen as indeed the correct translation?


For some more detail of the following three items see this web-site and any further links from there:

* “43” - (played an octave higher to demonstrate the highest and “flutiest” range of this constant-scaled rank - e.g. in emulation of “portative” pitches)

* Estampie on the constant scaled rank alone. The issue of pitch: this piece seems to function best when transposed a tone higher on a 33 mm constant-scaled rank (effective pitch a=520Hz.). Played at notated pitch the lowest notes have speech hindrances, the highest do not “bloom” quite so effectively. Played at even higher pitch (e.g. a 4th higher) the overall increased “flutiness” reduces the clarity and delineation of the bass part, bringing everything closer to a uniformity with the treble - which in its turn seems not to “bloom” so effectively.

* Sequitur benedicite (two ranks in chorus: 8'+8'). A combination of two ranks at the same pitch has many historic precedents - from Sélestat MS to the van Straten organ and later, especially in the Netherlands. Although we cannot exactly authenticate the specific scaling combination of Arnaut+Constant-scaled 33 mm, the combination here is so striking and convincing that organists using this organ now use it regularly and ask for this Gestalt of the organ to be provided. It also shows interesting differences to the auditor when listening from the organist side or the calcant side.

Visits to the organ are welcome - best by prior arrangement.